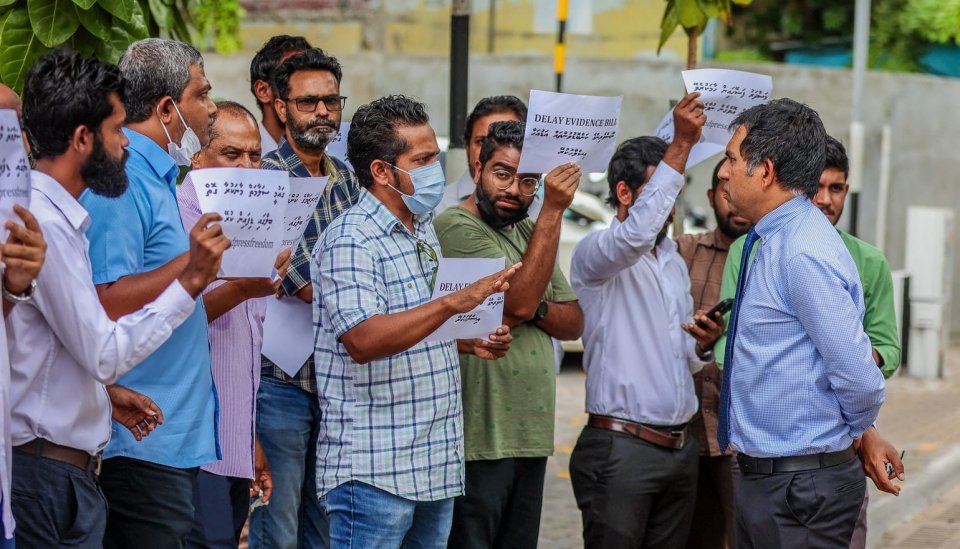 Journalists talking to MP Saeed at the protest against the new evidence bill/ Photo: Dhauru news

The Editor's Guild says the Parliament's demands to remove news articles about the secret committee meeting held yesterday after the parliament's secretariat broadcasted the live feed goes against journalistic principles.

The parliament's secretariat admitted that it had released the audio of the closed-door meeting of the Security Services Committee on the parliament's youtube channel after the committee decided against it.

It said that the audio was released due to a technical problem. The Parliament said despite it being said that the meeting was to be held behind closed doors, some news outlets had published news from the meeting. It further demanded the outlets remove these news articles.

The Committee had discussed the new regulations formed under the new Police Act with Home Minister Imran Abdullah summoned to the meeting.

The Editor's Guild said that it was concerned that the parliament had asked the news outlets to remove the news about the meeting and that journalists have the right to report any information they get after ensuring the validity of the information.

It further said that the journalistic principles practiced in the country would set how much of the information the journalist can use in reporting.

The editor's guild said that the news from the meeting does not jeopardize national security and that it is the parliament's responsibility to maintain and make sure that such information is shared behind closed doors.

Meanwhile, Maldives Journalists Association MJA said that the audio was released for nearly an hour and that the parliament had not instructed news outlets not to generate content based on the audio before they published the news stories.

MJA further said that the Parliament cannot demand the news outlets to remove stories and that it should work within the established channels to voice their concerns.